5.2 build 1174
This update brings a bunch of small improvements and bugfixes to prepare for the next leg of the development of new features - a lot of extension related work is planned for 5.3.

Bugfixes in change log now have the earliest affected version in square brackets so you know if your version is affected.

Special thanks to Creeperface01 and WolverStones for their contributions to this update.

5.2 build 1147
This update contains a few quality of life improvements as well as bugfixes.
Security vulnerability with cookies not being invalidated properly upon logout was also fixed.
Special thanks to Kopo942 for three contributions to this update.
Change log
New features
Servers dropdown 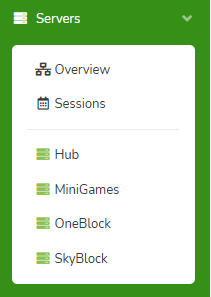 Network page servers dropdown now has links to all servers in it. If you got loads of servers there is a scrollbar, so no worries. Thanks to Kopo942 for implementing this.
Persistent cookies
Login cookies now persist across restarts, so that you don't need to log back in after scheduled reboot. If you still need some way to log everyone out, /plan logout * command was added with plan.logout.other permission.
Cookie expiry time can now be set in the config under 'Webserver.Security.Cookie_expires_after'.
During implementation a security vulnerability was discovered where due to the Request headers not being passed inside the code properly, the cookie was not found during logout and was never invalidated. If a rogue actor got access to the cookie they would have been able to use it for the 2 hours cookies were valid in the previous versions.
Join address filter to the Query page

You can now filter players in the Query based on what address they have joined with.
Bugfixes
MySQL driver trouble ("Operation not allowed for a result set of type ResultSet.TYPE_FORWARD_ONLY")
Issues with Plan mysql driver overriding driver of other plugins has been resolved by unregistering the driver after it has been loaded.
Join address gathering
Website
Other

5.2 build 1124
Sorry for releasing that mess yesterday. I was way too tired to be making a release in the first place, and it only got worse as issues started pouring in. Well, live and learn. Today's a new day and I have spent 2 hours sorting out issues and testing the join address gathering.
Change log

Previous update jar was too large for Cloudburst, please see further below for change logs of updates that have not been posted on Cloudburst.

Some servers like to use different addresses for different advertising campaigns or server listings. Now the join-address player’s use when they join the server (eg "play.server.com") for the first time is gathered. This information is shown on the playerbase overview tab on both network and server pages. Database schema updates.

Special thanks to vacoup for implementing this feature.

Sessions are saved on shutdown. Previously this might stop the server from shutting down if the MySQL was too busy or slow to respond. Now the attempt times out after 4 seconds and the unsaved sessions are stored on the next server start instead.

Now Plan will download the database drivers from maven central first time it enables. This reduces the jar size to 9.9 MB. This had to be done to get under the 20MB limit of Ore and Cloudburst for plugin size. Those release platforms have change log for previous versions in the same update. If you limit outbound connections with a firewall, you need to allow connections to https://repo1.maven.org/maven2/

Due to bintray shutting down, all Extensions had to be moved to another repository. They’re now located in a self-hosted reposilite instance.

This is a large large update with a bunch of new features and even more bugfixes. As you may notice, I have changed my username to AuroraLS3 (so the developer hasn’t changed, don’t worry).

Have you ever wanted to know who played the most in a specific month or week? How about knowing how active your donators are? Or who was online during a lag-spike? Now it’s all possible, with the /query page!

Sometimes database queries are slow and waiting for results takes a while. Now the pages display previously calculated results until the queries complete instead of timing out.

Because of this it is now also possible to update parts of the page by clicking the little refresh icon instead of reloading the whole page.

Players page now contains the same extension data as the /servers pages, so that those on networks can also view the Extension data from bungeecord in a neat table.

In order to make it more useful for servers where players AFK a lot, the players table now uses active playtime instead of playtime.

A new setting under Webserver.Security now allows use of X-Forwarded-For header to determine the connecting IP.

This setting is disabled by default, it is important when you use this setting that the reverse-proxy can not be bypassed as otherwise spoofing IPs is possible.

A MySQL connection hiccup should no longer causes Plan to close the connection pool. A bug in the code caused the pool to be closed and opening it again always failed.

5.1 build 810 - hotfix for build 808
This build contains a few bugfixes.
Special thanks to Shadowhackercz for updating Czech locale.
Change log
Commands
Plugin Enable
More information is stored in ServerInfoFile.yml to speed up plugin enable when database is busy
Locale
Extensions

Special thanks to Shadowhackercz for updating Czech locale.

5.1 build 791 - Change log
This update brings lots of improvements made by contributors, as well as bugfixes.
Special thanks to Vankka, FluxCapacitor2 & antonok-edm for their contributions!

Thank you for the numerous answers to the feedback survey. I have looked at the 54 answers and did some analysis of them on discord.
You can also find answers to some of the questions posted on the survey here #1624.